Choosing what city to move to can be a daunting decision, especially when more money doesn't always mean more space. We compared house listing prices against the average square foot, so all you need to do is choose your forever home.
10th November, 2021
by Carl Walsh
Share:

As well as having a comfortable mattress, having a clear, clean and organised bedroom has been proven to increase your quantity and quality of sleep as it creates a more relaxing environment. But how are you supposed to do that if you’re cramped into a tiny little bedroom where there’s barely enough room for furniture, let alone a decent-sized bed? Having a larger bedroom allows you to create the best feng shui and a more tranquil environment to relax and rest in.

Not only is it important to have space to create the right feng shui, but having a bigger bedroom also gives room for a larger bed! With the average person wriggling, tossing, and turning 60-70 times in the night we all need as much space as possible from our partners to ensure we get as much sleep as possible.

So, over here at Bed Guru we looked into the top cities to live in the UK and investigated rental properties average sized bedrooms and cost per square footage across the country.

As the capital of England, London is repeatedly voted as the best place to live because of its endless job opportunities, vibrant culture, large transport networks, and of course it’s history. However, if any of you have ever thought about moving to London, one of your first concerns is probably how expensive it is and for not a lot of room! Countless articles have been released by the likes of LadBible or the ‘What I rent’ articles on the metro that shed light on the size and costs of London flats, apartments, and houses. Twitter users across the world also joined in the discussion to compare rental properties and prices in their local region compared to London, often mocking what they can get for their money compared to in the capital.

However, our research revealed that London in fact has the second largest average bedroom size – 143.23 square foot! Although you may not expect London to have some of the largest rooms, I’m sure you would expect it to come with a hefty price tag! Costing an average of £8,966 per square foot, you are paying nearly 9 grand for a space not even as big as a large pizza box! 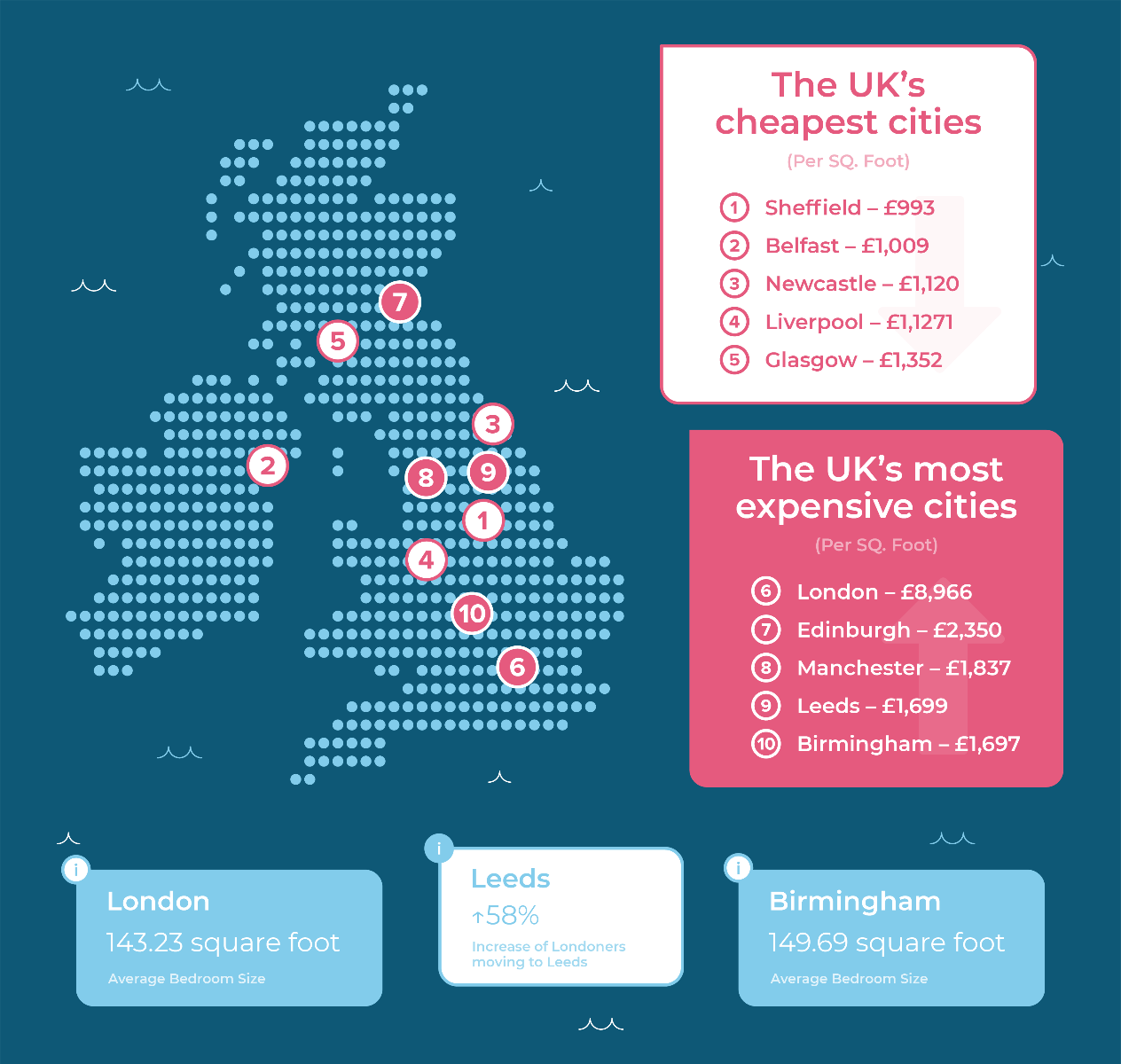 With a huge increase in the number of people moving into Manchester in recent years it’s no surprise Manchester made it onto the list of UK best places to live. Many Londoners are making the move up north as living the London life isn’t all it’s cracked up to be. While it’s great to live in the hustle and bustle, it’s hard to make the most of it when the cost of living is so high.

It’s said that Manchester is very similar to London with modern skyscrapers, stunning architecture and some of the best food and drink. While they have a whole host of your fave bars and restaurants, Manchester also prides itself on its remarkable independent hospitality scene. Take the Northern Quarter for example, it is filled with a wealth of independent restaurants, bars, and shops (which are all very Instagrammable at that). It’s allowed the city to reap the benefits of its developments whilst also maintaining its local charm and character, making the city a little bit more unique.

There are rumours that Birmingham is set to become the place to be. With its rising economy, Birmingham offers a whole host of opportunities for employment and to earn just as much as a London salary, whilst also keeping the cost of living low.

Coming in first for the largest average bedroom size is surprisingly Birmingham. So, if you’re looking for big bedrooms, consider moving to Birmingham! With an average room size of 149.69 square foot, you are able to fit not one, not two, not three … but nearly FOUR super king beds in the average Birmingham bedroom! So, why not treat yourself to some extra sleeping space and look into getting yourself a super king … or four.

Similarly to Manchester, Leeds has seen a huge increase in the number of people moving into the flourishing city, with the number of Londoners moving up to Leeds rising by 58%. Although London has previously seemed like the be-all and end-all to young professionals, many have seen the light and are thinking beyond the capital and seeking opportunities to make the move up north.

However, if big bedrooms are important to you, then I’d hold fire. The average size of a bedroom in Leeds is only 113.87 square foot – the only city’s bedrooms that couldn’t fit at least three super king beds in! With the smallest average bedrooms size in the nation, Leeds is still in the top 4 most expensive cities per square foot! Seems like in the more northern cities you’re still paying top prices and for smaller bedrooms … what’s gone wrong there?