The weekend saw us complete our toughest, but funniest, mattress delivery challenge yet; to the finish line of The Great Knaresborough Bed Race 2016.

One of the most surreal dates in the calendar, it’s the day Yorkshire has celebrated our beloved beds in undeniably unique fashion for over 50 years. This year, however, we decided to join in and made our debut alongside the local running clubs.

What begins as a fancy dress parade, with decorated beds jostling for the ‘Best Dressed Bed’ award, becomes a leg-sapping 5km race up Knaresborough’s steepest hill by mid-afternoon. A team mate sits on the bed, gripping the polystyrene mattress like their life depends on it. And then there’s the bone-chilling swim across the deceptively-deep River Nidd to round it off.

It was nail-biting from the very off. The Great Knaresborough Bed Race was over-subscribed, so it was touch and go as to whether we’d get a spot. Having secured one, the Knaresborough Firefighters, who weren’t so lucky, kindly gifted us their specially built bed frame on wheels. Thanks again guys! 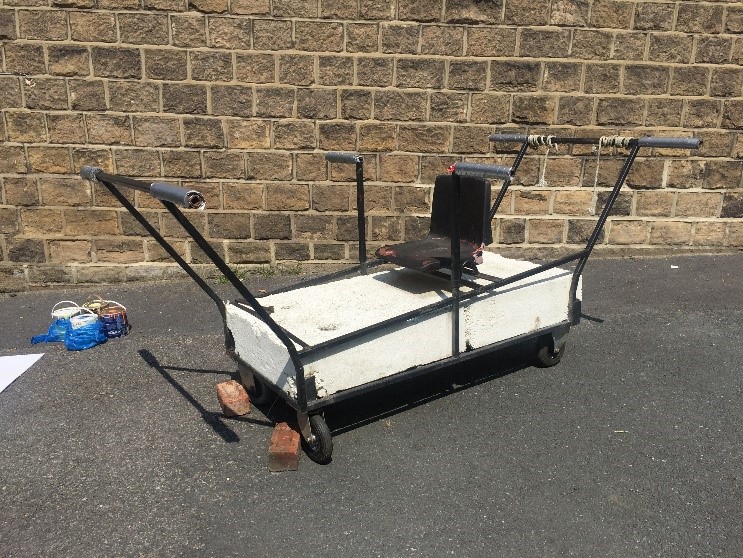 Themed every year, this year The Great Knaresborough Bed Race celebrated ‘Cities of The World’. Berlin, Rome, and London spring immediately to mind. And indeed, you’ll have seen them on the day. Yet we were tasked with recreating Bogotá, the Capital of Colombia in all its glory. We love a challenge!

Transforming our plain hessian sacks into Colombian coffee bags, South America’s greatest export, was the easy part. We piled them high on the mattress, then covered our bed base with graffiti murals, inspired by Bogotá’s street art scene. Seagulls provided a rainbow of hues to use, which also worked well on our headboard - cut and expertly painted to illustrate the Primatial Cathedral of Bogotá, the city’s iconic landmark. 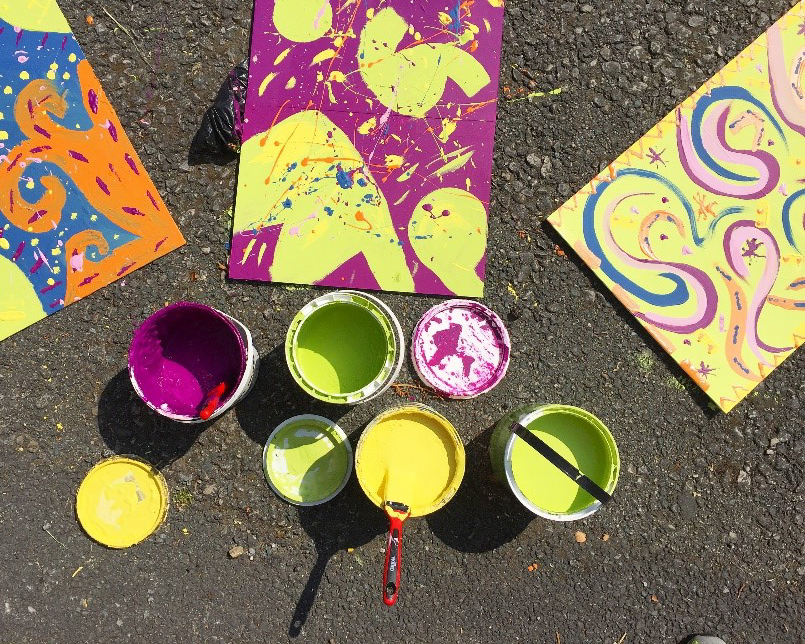 With strings of Colombian flag bunting to give spectators a hint as to where Bogotá is, we made a start on our costumes. Six hand-drawn Colombian football kits, transformed us into the national team. Nick became Valderramas, Colombia’s David Beckham, whose blonde mane is as world famous as his powerful right foot. While Ben donned a wig, moustache and jeans, to play the part of Pablo Escobar. 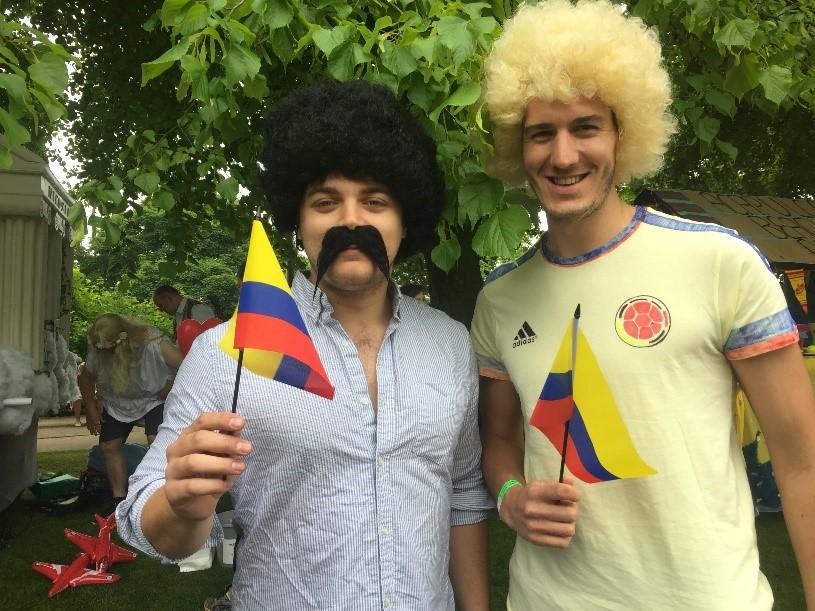 We were set. It was a matter of waiting to reassemble the bed on Knaresborough Castle’s green on the big day, which came around soon enough. Although we arrived early to make the finishing touches, the place was already buzzing.

One by one, all 89 of our rival competitors entered the castle gates with their inventions. From giant Rubik’s Cubes and an Amsterdam windmill, to an English themed summer picnic complete with Corgi shaped balloons. Even a replica of Coronation Street’s Rovers Return Inn. It quickly became clear that we had stiff competition, who’d invested heaps of time, pride and money into their beds. Some people performed carefully rehearsed dance routines while bands performed live music. The atmosphere was fantastic. We’d unwittingly parked next to the ‘Best Dressed Bed’ award winner; Aphrodite, from Greece, who gave everyone a laugh. Perched inside his ancient temple, surrounded by bubbles and heart shaped balloons, his bed even played love songs for the desired effect. With the awards out of the way, the parade began. We made our way through Knaresborough’s bunting covered cobbled streets, past thousands of smiling faces, for about a mile. We felt like royalty, high fiving the crowd as we passed, shocked by how many of you came out to enjoy the beds. We spotted more than a few of our lovely Bed Guru friend’s and customers along the route too!

The journey finished down by the River Nidd, at the race’s start line. We had to whip off all of the decorations, shove them in the skip, and change into our Bed Guru t-shirts ready for the run. With our hard-work binned, The Great Knaresborough Bed Race’s final challenge could start.

Looking around, other teams had taken a seriously professional approach; glugging protein shakes, scoffing fruit and stretching out their limbs in earnest. Team Bed Guru, on the other hand, tucked into a tasty Bavarian hot dog and kept calm. Most of us hadn’t yet seen the course so we were blissfully unaware what lay ahead. 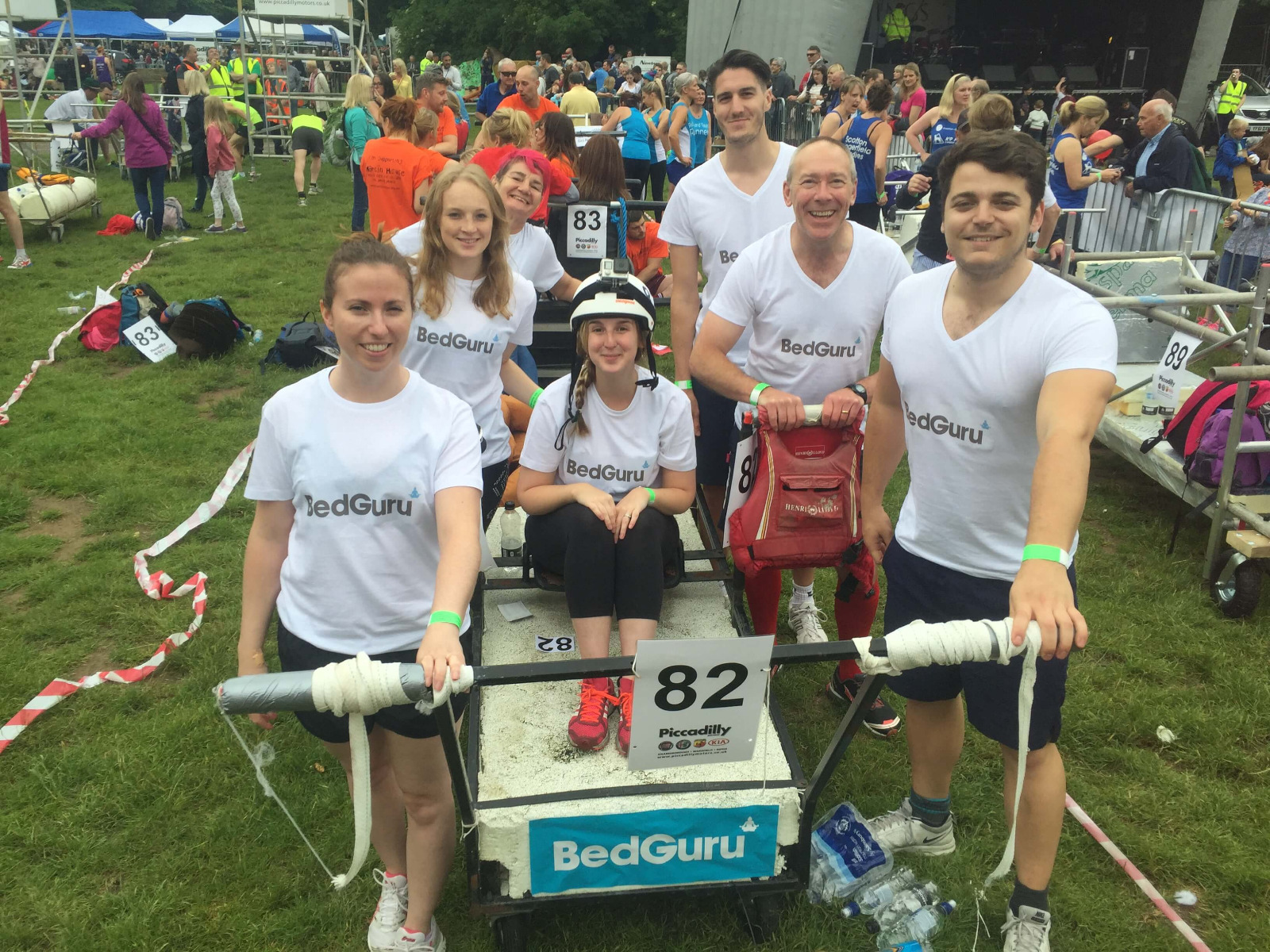 Good job too! The crowd carried us along, but it was utterly gruelling. Straight out of the gate, we overtook the team before us, running fast along the flat stretch, beneath the infamous arches of Knaresborough’s aqueduct. We gave the incredible hill everything we had, spurred on by our team mates on the side-lines, who gave us the umph we needed.

There was no stopping us after that. The town centre flew by, we overtook another team, and soon descended back down towards the river. No one told our passenger that we were running at full stride down the hill, struggling to keep up with the bed.

Rounding the final corner, onto a bumpy off-road footpath, we legged it to the River Nidd. In we went. A tough swim across the river to the other side pushing the bed across. Not wanting to dilly-dally, we pushed through to hoist the bed, and our human cargo Niki, up the muddy bank. Job done. We’re chuffed to say that we crossed the finish line in 22 minutes! 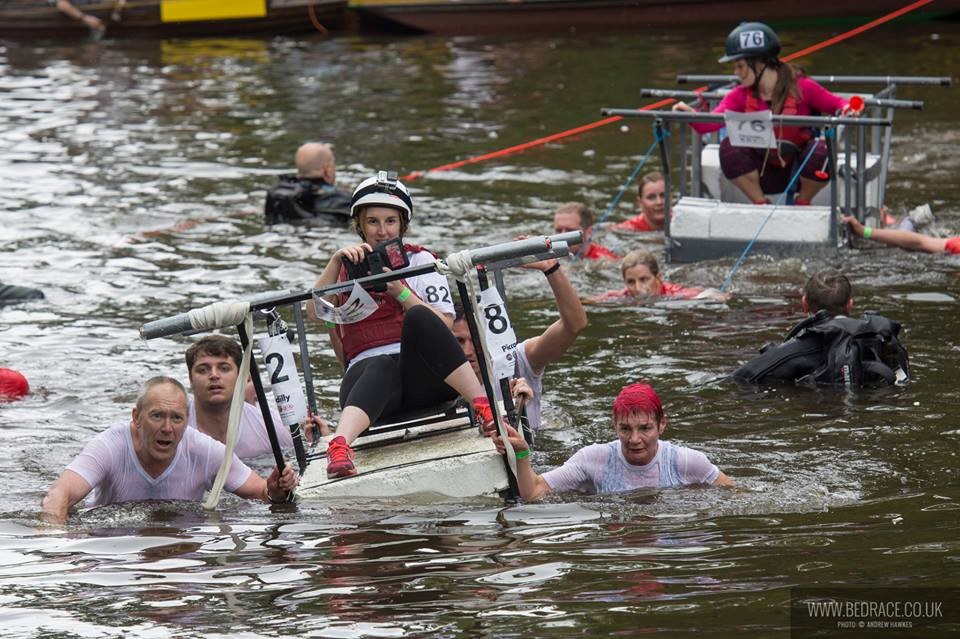 The Great Knaresborough Bed Race lived up to its name, and then some. Thank you so much to each of you for cheering us on. We loved every minute, even the River Nidd. From now on, however, I think we’ll stick to delivering your new beds and mattresses in our Bed Guru van, rather than on foot! 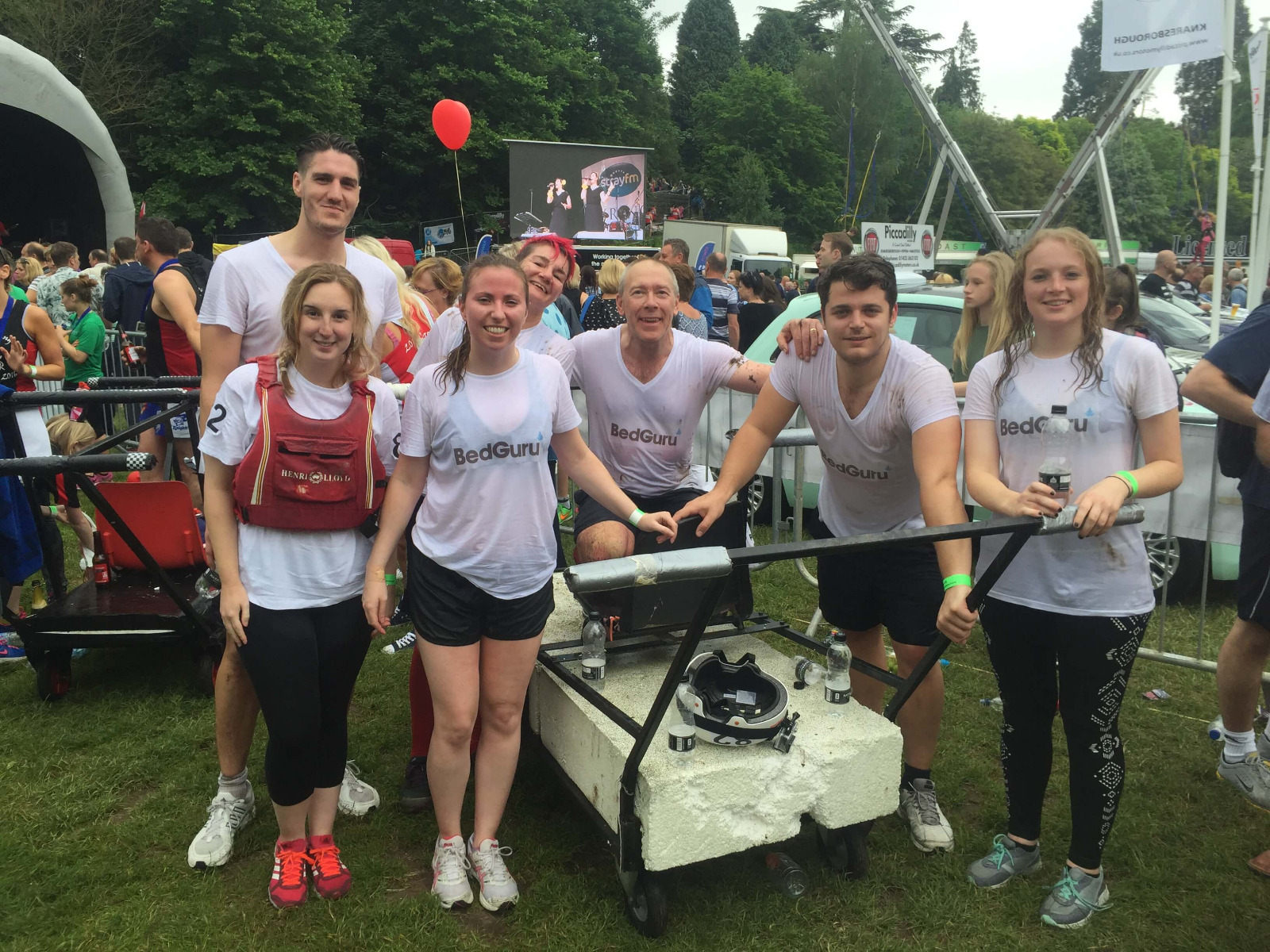